History of the gold mine

It is believed that gold mining activities started in 1370 in Toi, Japan. A handful of gold deposits were discovered there in 1577, but 1601 marked the heyday of gold mining.

Toi was one of 60 gold mines in Izu Peninsula. Gold that was produced there not only enriched the treasury of the ruling Tokugawa clan, but also created new opportunities for the development of the province. 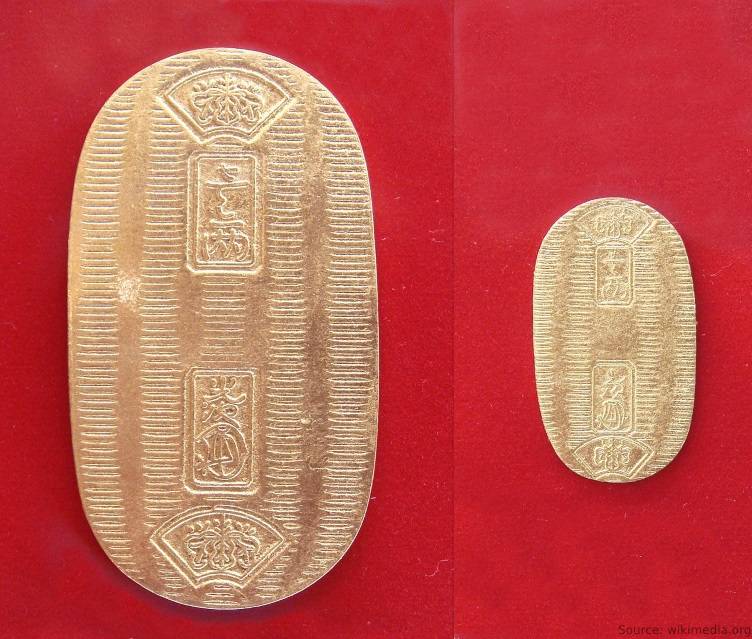 In the photo: The gold coin of the Tokugawa period.

In the Middle Ages, Toi was considered a rich city. Numerous traders moved to the city, providing supplies for the workers and the administration of the mine. The city became known as Toi Sengen "Toi of the 1,000 shop".

Gradually, the mine became less productive as its tunnels were flooded. Workers could not work in harsh conditions. Hot springs and low oxygen levels forced administration to install water pumps and ventilators. Production became more expensive, while gold became a rarity. The mine was closed.

In 1917, new deposits were discovered there. Toi became the second most productive mine in Japan after the gold mine Sado.

During its period of exploitation, 40 tons of gold and 400 tons of silver were produced. An average of 5-10 grams of gold ore were extracted from one ton of rock, quite often 30 grams, and some rocks yielded as much as 600 grams per ton.

In the photo: Precious ore from the gold deposit Toi, containing 30 grams of gold and 250 grams of silver.

The mine finally closed in 1965, but later found a new life. In 1980, the gold mine reopened for tourism as a museum. Thousands of tourists flocked to Toi to learn the history of the place and fill the shoes of gold prospectors.

In Toi, you can go down the mine to see the history of gold mining. Robots reproduce the life and work of Edo-era miners. The length of the tunnel in which the historical exposition is located is 350 meters, the tour lasts nearly half an hour. 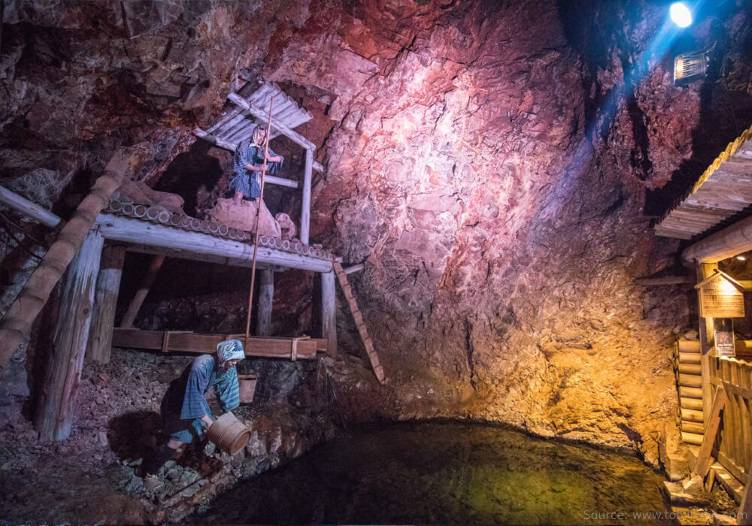 In the photo: The process of gold extraction and cleaning procedures.

Apart from mannequins, other interesting objects can also be found. According to legend, large gold bars were cleaned in the Golden Fountain. Washing your coins in its waters will certainly bring luck, filling pockets with money. 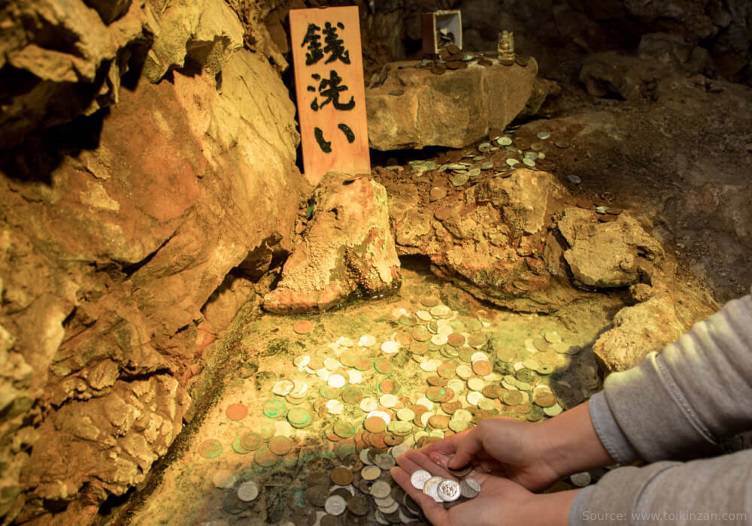 In the photo: Employees must clean up the Golden Fountain weekly, removing the excess of "lucky" coins.

The underground temple is a mountain shrine. You can say a prayer and make a wish to have your dreams come true. Pour water on the statue of Buddha – an indispensable rite of the tour. 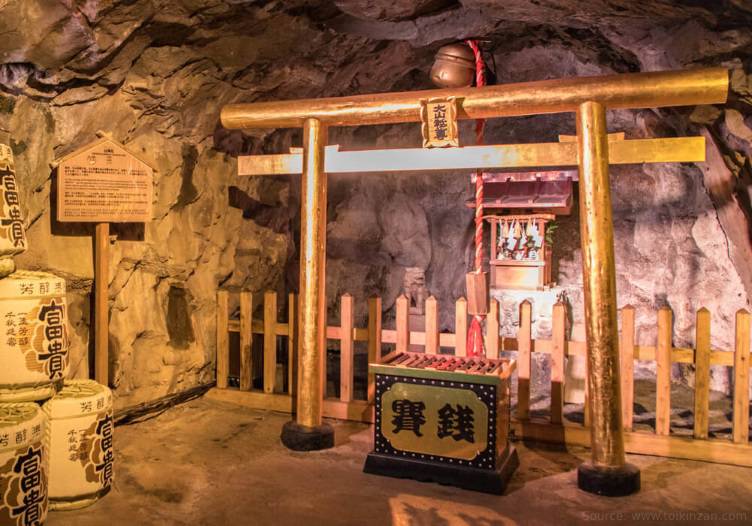 In the photo: Gold leaf is used in the decoration of the temple.

In addition to the underground gallery, there is the Golden Hall in the mine museum of Toi, filled with exhibits related to the gold mining craft. Among the unique ones is the biggest gold bar in the world. It weighs 250 kilograms, the object can be touched. It has the Guinness certificate, confirming the authenticity of the record. 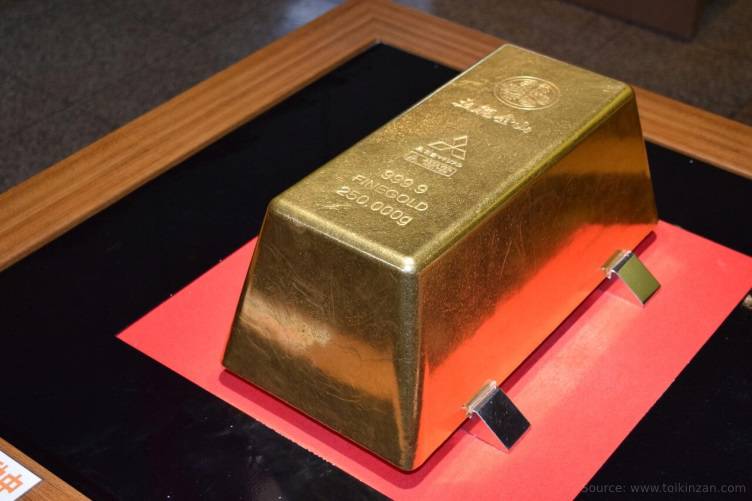 In the photo: The most popular exhibit.

There’s a gold ore in the hall, an old ship carrying gold, and a diorama of the local landscape.

There is a place in the museum that is massively popular among the tourists – “Sohitama Kanoyama”, a specially equipped room where every tourist can try their hand at mining gold. 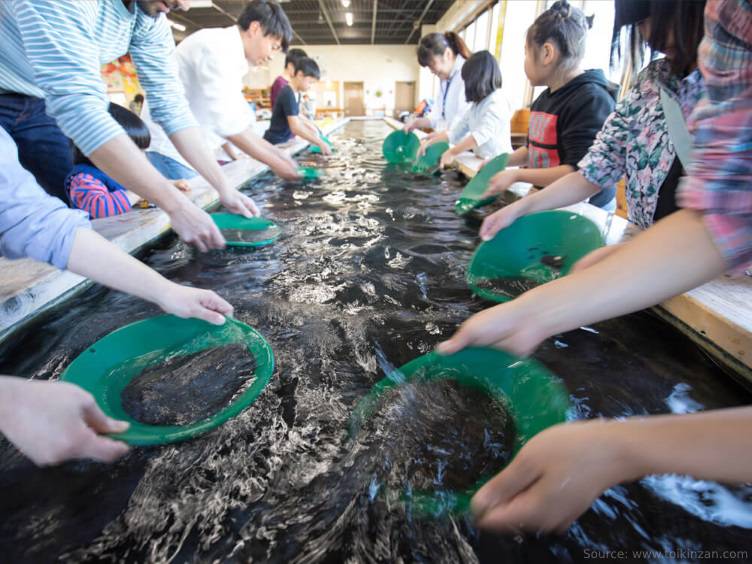 In the photo: If the prospector manages to extract 30 gold grains of sand in 30 minutes, he/she will receive a professional certificate.

The staff of the museum adds small grains of gold in the black sand, so that visitors can mine them afterward by dipping special plastic plates of ore into a hot spring. Tourists take the extracted gold home as a souvenir.

Gold works in mysterious ways. Your grandmother's ring could be made of gold of ancient Inca. A thousand-year history of mankind is hidden in gold.

Find out more about the riddle of an unknown Indian tribe