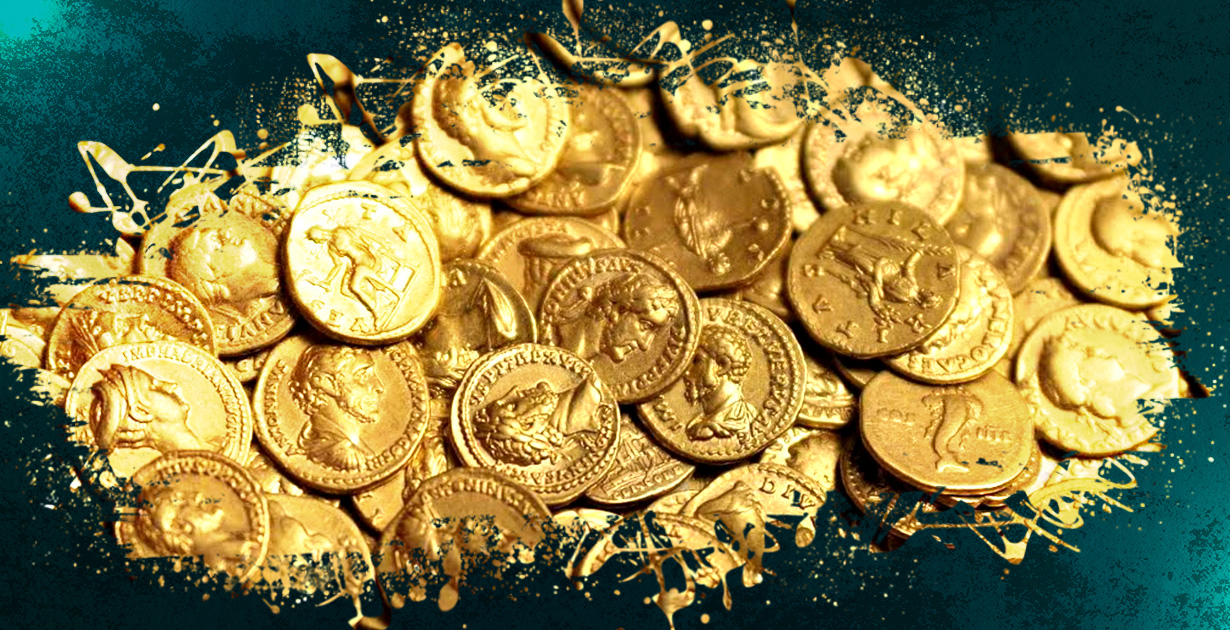 England is one of the countries where treasures are found with unfailing regularity. Perhaps this is due to the specific history of the island or the modern legislation system, under which the museum can buy out the treasures from those people who have found it at full price. The discovery of the Hoxne valuables happened by chance, it all started with the loss of a hammer, an ordinary hammer, not a golden one.

In November 1992, a farmer lost a hammer near the village of Hoxne in Suffolk, England. He asked a neighbor who was treasure hunting to help him in his search. A neighbor found a hammer…along with the largest golden hoard of the late Roman Empire. 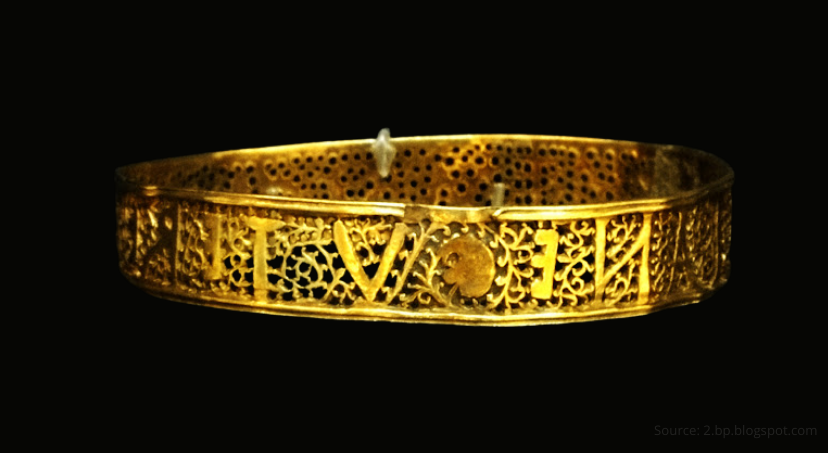 In the photo: one of the bracelets belonged to an unknown lady Juliane, as evidenced by the inscription.

Lucky prospectors reported on the discovered treasure to the authorities. The next day, archaeologists arrived on the field. Excavations lasted the whole day and a huge amount of gold, silver and bronze was finally discovered. Here is a partial list of what was found on the field near Hoxne:

The treasure was buried in an oak box of 60x45x30 centimeters. Things and coins were packed into smaller boxes, cloth and hay. A few years before the discovery was made, the oak chest filled with valuables was damaged during plowing, eventually becoming closer to the ground surface.

A few years in a row, the archaeologists were exploring the area, finding more centuries-old treasures again and again. 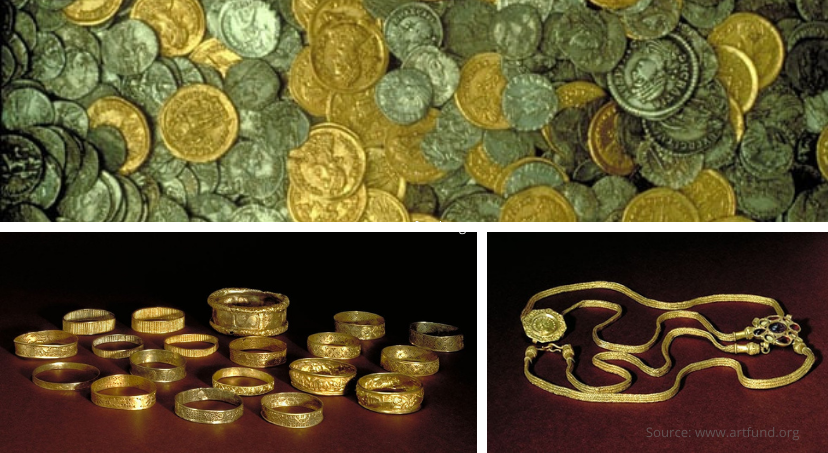 In the photo: even a small part of the treasure looks impressive.

The most significant relic was the necklace made of four parts, connected by two pendants – front and back pendants. The front pendant is encrusted with amethyst and four garnets. The second pendant is made from antique gold coins. Such chains were worn by wealthy married women. 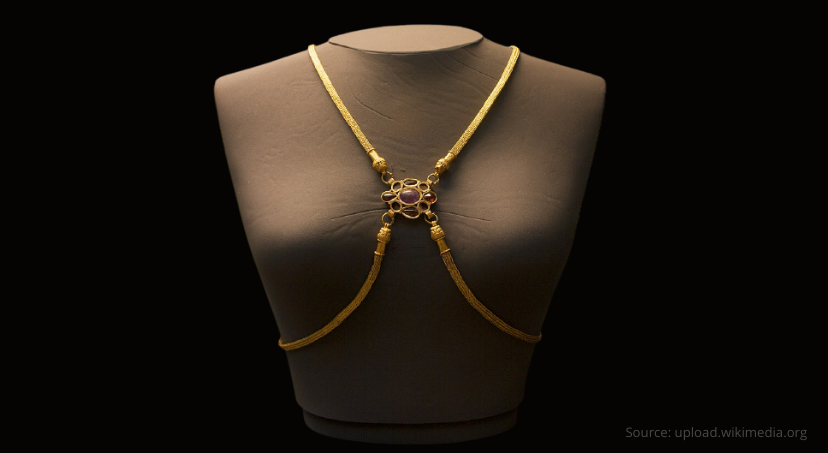 In the photo: there are four stones missing on the pendant, probably pearls.

Archaeologists cannot identify the owners or understand the purpose of the hoard’s burial. An oak box, caskets with silver locks and careful packaging suggest that the values belonged to a wealthy family. Originally, there was a Roman settlement where the owners of the treasures could live, approximately three kilometers from Hoxne. If the hoard belonged to robbers, then gold would be packed in a fabric or a leather bag.

Based on the number of silver spoons with the elements of gold, it was a really big family. The spoons were inscribed with specific names and wishes of a successful life. Such gifts were given to the children on the day of the christening. Archaeologists suggest that this is only a fraction of the treasure. People of such status, as a rule, owned a set of large gold and silver plates, jugs and cups.

The Hoxne artifacts are stored in the British Museum in London. Museum visitors can familiarize themselves with most of the relics, among which there are a statue of a tigress (probably the broken handle of an unidentified vessel) and pepper pots made in the form of small animal sculptures and people. 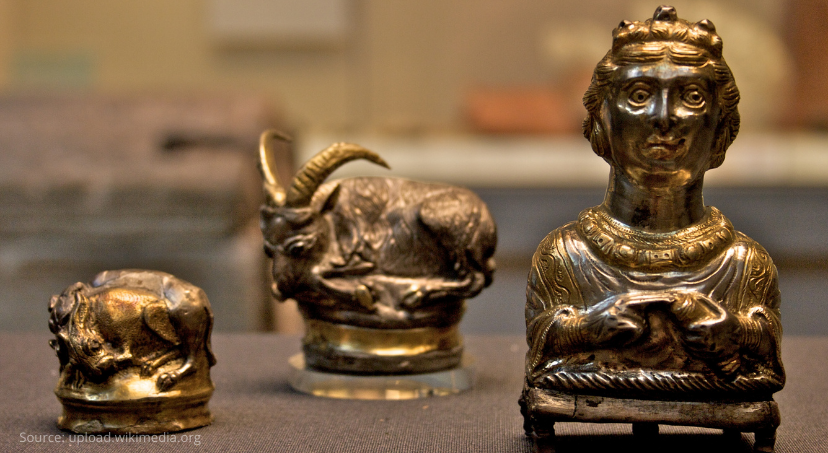 In the photo: the cruet with the image of the empress (or a noble lady) – one of the most valuable exhibits.

In 1994, the Hoxne Hoard was estimated by the authorities at 1,750,000 pounds. The money was paid to the people who found it. Due to the fact that the farmer and his neighbor contacted the competent services in time, the valuable findings from Hoxne were kept 100% safe, which was great news for the whole community of archaeologists in Britain. As a result, in 1996, the law on treasure prospecting was amended, simplification of formalities made life of amateur archaeologists easier, they became more interested in donating treasures to the state.